The City of Colorado Springs (coloradosprings.gov) has an extensively maintained Drupal website used as a information gateway for the community and visitors. The city brought Monarch in to initially address several specific issues on their already existing website, but the City has continued to rely on Monarch to re-engineer the site to address structural problems with the site that prevented the city from leveraging their technology platform to its full potential. This work has continued over several years and has been instituted through two phases so far. 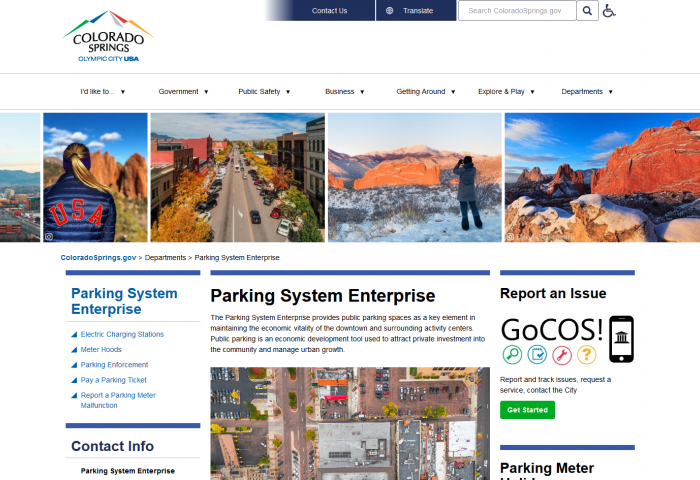 The array of services provided by Monarch for Phase 1 included:

Responsive Theme Design - Prior to Monarch's involvement, the city's site redirected page requests to m.coloradosprings.gov. In short, this created a completely separate set of mobile sites to maintain and test. As most city personnel use the site on a desktop, a mobile page could be displaying incorrectly for some time without city personnel from realizing there was a problem. Monarch developed a truly responsive Drupal theme based upon the desktop version as a model. Based upon the screen width of the viewport, visitors can correctly view the site using the same domain name with no redirections. This organization also simplifies the ongoing support for the site. During this theme rewrite, Monarch implemented a rebranding effort led by the city's communication department.

Simplified Visitor Experience - The city took this opportunity to rework the navigational structure and simplify how visitors find and access the content they need. With the new flexibility of the site, city personnel could easily prototype menu structure changes and apply future changes to the site.

Streamlined Departmental Administration - Prior to Monarch's redesign, departmental personnel made changes to their area's website content, but the changes could not viewed by the public. The original site was using a Drupal module called Domain Access, which did not operate correctly with the hosting company's caching system. The result was that a web page was changed, but it was not displayed. Monarch removed the domain access module and simplified the site structure and entire content authoring experience. Content authors no longer need to manually select the department for each piece of content and the content changes show immediately to the public. In addition, Monarch decoupled a number of departmental sites, allowing each department to have more complete control over the content and structure of their individual site.

Reduced IT Support - To truly cleanse the existing Drupal site of all of the undue complexity, Monarch effectively created a new Drupal site and migrated all existing content into the new site. Only modules and data truly needed were migrated, creating a lower maintenance site for the city's IT department.